A Book Review: Wrath by John Gwynne (The Faithful and the Fallen #4) 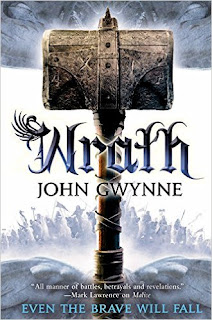 Look to the picture on the left, can you see a giant war hammer dominating the artwork? If anything, this book cover should stir, and make you feel, the story hidden underneath it must be an epic tale of blood and thunder. This book, called Wrath, is the fourth and the concluding chapter to The Faithful and the Fallen series. 5 nights ago, I read the first page in Wrath, and its opening transported me back in John Gwynne's fictional world. I tread in the middle of a titanic struggle, where songs of courage, and poetries of grief, reached into the sky.

Time stopped in those nights when I read Wrath. I willed myself to read it slowly, because I did not want this story to end. Alas, I failed miserably! The story in Wrath is too gripping and I devoured this 700 page book in the space of 4 sittings.

Reluctantly, I shelved Wrath next to 3 of its bookish kins; Malice, Valor, and Ruin. I sighed deeply, a mood of bitter and sweet filling my mind, then I sat down to write a review for Wrath.

The god war is sounding its gong; the end is near.

The seven treasures, having marched from all corners of The Banished Lands, come to be united at the legendary fortress of Drassil. Cladius, deep in his scheme, summoned the full force of the Black Star to Drassil, to protect the treasures while he performed an abominable ritual to bring Asroth, the lord of destruction, into the world of the flesh.

Meanwhile, Corban, his friends and allies, gathered in the forest heart of Forn. They have all suffered, lost families and friends, to Cladius and the Black Star. Now, Corban and his allies are going to unleash wrath upon their enemies, for vengeance is theirs.

The fate of The Banished Lands dangles in the air. At the towering gate of Drassil, the Bright Star and the Black Sun will collide in a bone-shattering battle. But who will win?

A good novel can kidnap time, and Wrath does exactly that. Counting to 700 pages, this is by means a small tome. When I was reading this book, time disappeared; nights became hours, and hours became seconds. This story spreads power and fury. The tale seized me, and willed me to fly through its pages like a Formula One car thundering down the race track.

Wrath sets the stage for the final battle in The Banished Lands. As the book drew back the red curtains, my favorite characters walked on the stage, together they played the last act in The Faithful and the Fallen quartet. This final chapter is dark and grim , but with truth and courage, the heroes lighted the gruesome battlefield against the onslaught of darkness. I punched the air at moments when the heroes triumphed, I swore black curses whenever the villains gained the upper-hand, and I sighed in lamentations when tragedies struck.

The last sentence in Wrath came and left, not all of my favorite characters made it, even the survivors walked away badly scathed. The closure tastes both bitter and sweet, but this is what made this book so good. It delivered such a satisfying end, and it made me feel that an event, grand and majestic, just sunset in my reading world.

Beyond this, I shall keep my lips sealed about Wrath, lest I spoil the story. This is why my review for Wrath is uncharacteristically short. But I will say this – The Faithful and the Fallen MUST be on your TBR list, especially if you like reading fantasy fictions.