A Book Review: Valor by John Gwynne (The Faithful and the Fallen #2) 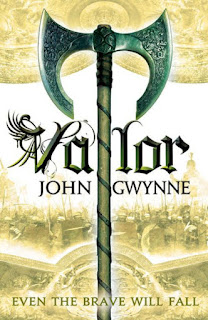 In Valor, fantasy novelist John Gwynne continues his sweeping tale of The Faith and the Fallen. This sequel, 650 pages in length, expanded the scope of the story, introduced more characters, and painted shades of grimness and darkness into its telling.

In a Blitzkrieg, High King Nathair stormed The Banished Lands with a formidable army, hammering his opponents to the ground. In its aftermath, Nathair forged a powerful alliance with Queen Rhin, who is ambitious, cunning, and as sly as a fox.

Who can stand against the might of Nathair? Still, the secret identify of the Black Sun remains shrouded in mystery, waiting to unleash the power of Asroth upon this troubled land.

Meanwhile, together with a band of exiles, the young warrior Corban fled his destroyed homeland, seeking refuge in the realm of Domhain. In order to arrive at their chosen sanctuary, however, Corban's small warband must cut through the heart of peril, where giants, wolvens, and Rhin's warriors await in the forest dark. Yet, Corban is still to face his greatest challenge; he must become the man who everyone believes him to be – the Bright Star – destined to be the avatar of Elyon, marking a return of the absent god.

Valor retains the same fast paced, character-driven storytelling from Malice, where every chapter is narrated in 3rd person POV. Other than a few newly introduced characters, many beloved characters from Malice returned in this book, and they played central roles in the story. Needless to say, the character development in Valor is top notch. From the villains to the heroes, every character is portrayed vividly in great depth. In Valor, they are wrestling with the past events from Malice, while those circumstances gradually shaped their characters and became a part of who they are. In this book, Corban is no longer a naive boy from Malice; he has experienced losses and sufferings, and Corban is starting to grasp his responsibility as the Bright Star.

Surprisingly, my favorite character is not Corban. Instead, as the story unfolded its curtain, a character called Maquin stood out and grabbed my attention. Maquin is an old warrior past his prime, who is seeking vengeance for his murdered young lord. When Maquin first appeared in Malice, he did not stand out in any special way. However, as the story unfolded in Valor, Maquin began to display qualities, qualities that made me root for his character. Without loitering into the spoiler territory, let me just say in this book, Maquin's tale twisted and turned in the most unexpected way – a dozen story moments made my stomach churn, left me hanging and worried for this grizzly old wolf. After I read Valor, Maquin is now my favorite character in this series, hands down.

Meanwhile, Veridas's character continues to fascinate me. This young warrior, honest and courageous, is misguided by lies, and he is deceived into fighting for the wrong side. Yet Veridas bears such fine qualities so I keep the flame of hope afire for him. I am still hoping Veridas would eventually discover the evidence, showing him that through deception, Asroth's agent has manipulated him into serving the bad guy.

Speaking of Veridas, this is where Valor (and this series as a whole) shines with brilliance. At the first glance, the story in The Faithful and the Fallen appeared to be a rehash of good vs evil. And yes, at its vein, this fantasy series is exactly that. But where this series excels and differs from other Tolkien-like fantasy novels, it is well-rounded characters. In this series, while the distinction between the good side and the bad side is as clear as black and white, but the author gave every character a believable motive, strengths and flaws, making them very human. Through masterful strokes of characterization, Gwynne is telling us an epic story about how, despite having the best of intention, some people can still land up championing for a harmful cause. I believe many readers would root for a character such as Veridas, and eagerly anticipating his redemption.

With excellent characterizations, a compelling story, and picturesque depictions of battle scenes, Valor proves itself to be a worthy sequel to Malice. The story in Valor darkens with a shade of violence, some characters unexpectedly met their tragic ends. When I turned to the last page of this book, for a few minutes, I felt scared and worried about the fate of my favorite characters, so I hesitated at reaching my hands for its sequel, Ruin. But of course I am continuing this series, it is irresistibly good! If you like fantasy novels in the vein of A Song of Ice and Fire, then make sure to add The Faithful and the Fallen to your TBR list.