A Book Review: Ruin by John Gwynne (The Faithful and the Fallen #3) 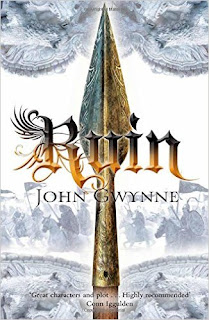 Two nights ago, I sat my on my couch and stared, mouth agape, at the last page in Ruin. This is the 3rd installment in The Faithful and the Fallen series. After a few moments of silence, my hands reached, frantically, for Wrath, the fourth and the final volume in the series. But before I head into my next bookish adventure, let's just say Ruin blew my mind. When this series began in Malice, the story started with the classic tropes of the fantasy genre, but it pulled me in with well rounded characters. By the time my eyes settled on the last 200 pages of Ruin, it was evident that John Gwynne took those tropes and turned it on its head. It is dramatic, it is full of twists, and this is one of the best modern works of fantasy fictions and I love it!

High King Nathair now possesses the cauldron, the most powerful of the seven treasures. On the back of Nathair's might marches legions of Kadoshim, advised by Cladius, who is as devious as he is cunning. Meanwhile, his ally, Queen Rhin, conquered the western regions in The Banished Lands and she rules it with an iron fist. Together, Nathair and Rhin are plunging the lands into an ocean of blood and fire, where Asroth's return seems inevitable. Has the fate of the lands been decided already?

No, the torch of hope is yet to be extinguished. Queen Edana and her small warband is marching, back to Adran, to reclaim their home; and she encountered unexpected allies in the shadowed swamps. Meanwhile, Maquin, an old warrior built with the savage economy of a desert wolf, is wrecking havoc in Tenebral.

Finally, Corban has embraced his responsibility and duty as the Bright Star of Elyon. The young warrior sets his mind on fighting Nathair and the Kadoshim. Friends and allies have gathered around Corban, and he marches them to the legendary fortress of Drassil, where the Bright Sun and the Black Star shall clash in one final battle. However, a secret, buried deep in the sand of history, is about to resurface and change the face of the god war...

Ruin ended with a cliff hanger. When you close the last page of this book, it will leave you dazed, with your mouth hanging open and dry. When you recover from the shock, you will run to your bookshelf like a star athlete and then scooping up the sequel as if it is the last piece of food on earth. Yep, this story is that good and the reviews on Goodreads bear testimonies to its awesomeness.

No spoilers, no spoilers, and I will not tell you why Ruin shocked me or how it ended. I will just tease you by saying this book will punch you in the gut. Then I will tell you how good the characterization is in this book. Every character in this book, from our beloved heroes to the despised villains, John Gwynne depicted all of them vividly with great depth. Are you a miniature painter? If you are, then you will know in miniature painting, the more layers you paint on it, the more realistic the miniature will appear to the eyes. This is how John Gwynne depicted his characters, not only in Ruin, but for the whole series. He piled layers after layers of stories, qualities, and personalities on every character. Yet, the complexity of these characters never complicated the story. Nope, the story in The Faithful and the Fallen remains smooth, fast-paced, and every easy to follow.

Indeed, the pace of Ruin beats at a rhythm just as lively and furiously as its 2 predecessors, Malice and Valor. When I said the pace in Ruin is furious, I REALLY mean it. This book, 750 pages in length, continues to divide its story into short chapters narrated in the style of 3rd person POV. In this book, treachery is afoot and bravery echoes loud, the life of your favorite character will be hanging constantly on the balance. There are battles, many battles, in this book, and the death defying battle scenes will make your heart pounding against your chest. Yet, atop the raging actions and the mounting suspense, Ruin allowed ample times for developing its characters, world building, and all the while, it is telling a compelling story about truth and courage.

Yes, truth and courage! With truth and courage Ruin ended, and with truth and courage it will open the series' final chapter in Wrath. As I am writing this review, I am already 40% into Wrath and so far it is spectacular! Do you like fantasy novels? If you do, then put on your armor, dust off the sword in its scabbard and fasten it to your back, then set out on a quest to your local library or a bookshop to acquire these powerful tomes known as The Faithful and the Fallen; it will bring a magic most powerful in any fantasy reader's bookish domain.