Book Review: A reflection on science and Christianity through Dan Brown's Angels and Demons 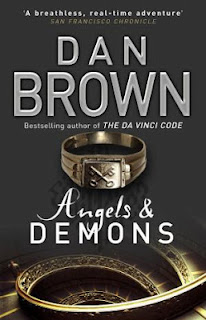 "Religion is flawed, but only because man is flawed"
- Dan Brown, Angels and Demons

In Dan Brown's exhilarating thriller novel Angels and Demons, he explored a hot topic; the ultimate showdown between science vs. religion (a metaphor to the title of this book). But in this show down, which one is the angel and which one is the demon?

Angels and Demons, is one of Dan Brown's earliest novels. Hollywood adapted this novel into a film in 2009, staring Tom Hanks. I thought the movie was entertaining, but I've never read the book. However, with the release of Dan Brown's new book, "Inferno", these earlier Dan Brown novels are now on sale. So I picked up Angels and Demons for 7 dollars at book depository, for a 600 page novel, this is a good bargain. Once I opened the book to the first page, I was glued to my seat, and finished the book in one day. And today, I will review this book and share some of my thoughts about this book.

Professor Robert Langdon, a Harvard scholar in religious symbology and iconolgy, was awakened by a mysterious phone call in his apartment at dawn. The phone call came in the form of a fax, accompanied by a gruesome photo of a murdered man, whose chest was branded with a ambigram containing the word "Illuminati". Robert Langdon was greatly disturbed by this image, because history has always believed this secret organisation no longer exists. The mysterious caller turned out to be the director of CERN, and he pleaded for Langdon's help for investigation. Startled by this ambigram, Langdon consent to provide assistance, and was taken to Switzerland to meet up with the director of CERN.

Upon arrival, Robert Langdon soon discovered the murderded man was a top CERN scientist, who discovered and created antimatter, a technology if manipulated, could become a weapon of mass destruction. Their worst nightmare was confirmed, when they discovered the cannister containing the antimatter was missing. At the same time, the Pope of Vatican passed away, and it was time to elect a new Pope. It was during that day, when the Swiss guard discovered the video footage of the cannister in the Vatican. When this news reached CERN, Robert Langdon, together with the daughter of the murdered scientist, Vittoria, travelled to the Vatican to offer assistance. Only to discover the ancient organisation of Illuminati has resurfaced, threatening to use the technology of antimatter to destroy the Vatican City, a revenge for scientists who suffered at the hands of the church in the past.

Time is running out, a thrilling adventure involving decoding ancient secret documents, traversing ancient passageways that will take Robert Langdon on a race across Rome, but will he be in time to prevent the destruction of the icon of Christianity on earth?

Reflection time: What I think about the book

Despite some historical inaccuracies, Angels and Demons, is a very good thriller. Dan Brown is a master storyteller, and he is definitely at his best in this novel. The storytelling has the typical esoteric atmosphere common to all Dan Brown novels, and the story flows very smoothly, packed with actions, adventures, thrills, and mystery, with a very interesting theme: science vs. religion.

In Angels and Demons, Dan Brown portrayed science and religion at odds against each other, and are completely incompatible.

But is this true?

My opinion is, while science and religion are not necessarily at odds against each other, but sadly, some people make them incompatible, creating this unnecessary battle.

What do I mean?

To start with, while this might sound like a surprise, but Christianity gave birth to the idea modern science. The idea of modern science, is the one grounded behind the belief that the universe operates according to a certain order, and that order, could be understood. And my friends, this belief that the universe operates according to an order, came from Genesis 1. More than a thousand years before the birth of modern science, many great Christian thinkers, were theologians as well as scientists. After studying Genesis 1, these Christian thinkers believed that God established orders to govern the universe, and this order could be understood. One of the most prominent example, is Augustine of Hippo, who, more than one thousand years before Einstein, proposed that time only came into being after the universe was created, this is later confirmed by Einstein's general theory of relativity. Another example is natural theology and the works of St. Thomas Aquinas, which later became the argument for the existence of God from design.

This belief that the universe could be understood, was an extra-ordinary view for its time. Because at the time, pagan people believed in an enchanted universe, in those days, pagan religion attributed any unexplainable natural phenomena to the works of gods (i.e. Thor and Zeus caused lightning). But in came Christianity, which proposed that God used order to govern the creation which could be understood! This belief later manifested into modern science, where the foundation of science is based on the belief that the universe operates according to a set of orders/laws.

This mean, science and Christianity, are not at odds against each other. In fact, modern science is a Christian legacy. Unfortunately, this legacy has been lost to the church. How did this happen? I think the battle between science and religion, is not caused by the holy scripture, but rather it is caused by humans. And the truth is, critics of religion as well as Christians are both guilty of starting this war.

The war between science and Christianity probably first started, during the enlightenment era. That's the time when scientists started to challenge the church's teaching about the flat earth, and geocentrism. The most prominent cases involved Corpenicus and his idea of heliocentrism, and later, Galileo who looked through the telescope and pronounced the earth revolves around the sun. It is known, that Galileo ignored the church's plea to delay the publication of his works, while offending the pope. Because of this, Galileo was put under house arrest for the rest of his life, and today, Galileo has become the icon of freethinking scientist who rebelled against the church forever seeking to oppress scientific truth. The more tragic case is Giodarno Bruno, who proposed the idea of infinite universes with intelligent life, the church charged him with heresy and Bruno was sentenced to burn to death on a stake. In general, during that era, many scientists suffered persecutions at the hands of the church. And this is why today, there is a general stereotype the church oppresses scientific truth.

But by looking through the lens of history, we know the persecutions of the scientists during the enlightenment era, is not because science and Christianity are at odds, but it is because some church leaders at the time, were unwilling to update their worldview. This "denial" mode, is often motivated by fears. The fears that the new scientific discovery might threaten with their view of bible interpretation, and the fears that a new scientific discovery might bring down a certain religious tradition, causing them to loose their religious identity.

But what about today? Sadly, while the churches are no longer able to persecute scientists for new discoveries, but within the church, there is a general, anti-science vibe. I suspect this is caused by religious critics, and neo-atheism marching under the banner of science, pronouncing that science, has disproved Christianity, so some Christians became suspicious against science, they think scientists do research with the intention to disprove Christianity. But this is not the only factor, some Christians, are so fiercely defensive on their view of Bible interpretation, these people insist, the Bible can only be true if it is interpreted a certain way. And when the result of their interpretation came into conflict with modern science, they reject science because otherwise, their faith will fall apart. Both attitudes lead to the fortress mentality that we often see within the Christian circles.

I say, these views are all wrong. Because science and Christianity, are not at odds against each other. When we look back to the history of Christianity, we discover, modern science, is a valuable legacy left to us by our Christian forefathers, who, believed God created a wonderfully made universe governed by sets of beautiful laws, and those laws, could be understood. The truth is, the Bible teaches matters related to the our hearts and spirituality, while science, teaches us about the working of the natural world. Science and the Bible, are both truth, but of different nature, running parallel to each other. Yet, the existence of science and the Bible, is not a duality, both are revelations and testimonies from a God who wonderfully made creations out of His love, a creation containing both the material and the spiritual which He declared very "good".

So let's step out of our fortress mentality in the area of science and Christianity. Over the years, I have seen, and experienced a lot of sad conversations when Christians will publicly judge fellow Christians with more open minded views toward science, as not being faithful to the bible. This sort of judgment causes hurts, frustrations, and alienation, running in contradiction to the vision of Christ's church, providing cannon fodders for critics of Christianity.

Friends, this fortress mentality, is more destructive than constructive, it does not build but tear down, and it does not encourage but judge. The truth of the Gospel, the message of love and forgiveness from the cross of Jesus, is a much stronger rock to stand on, than being besieged in your mental fortress. Step out of the fortress, stop the war against science, let's all come out to stand on the rock of Christ and proclaim His name, and one day, the theme of Mr. Brown's novel will be but a memory of conflicts from a distant past.

Posted by Daniel Lin at 5:10 AM No comments: