A Book Review: The Amazing Maurice and His Educated Rodents by Terry Pratchett (Discworld #28) 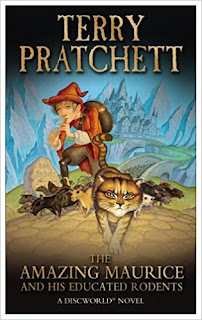 "A good plan isn't one where someone wins, it's where nobody thinks they've lost"

- Terry Pratchett, The Amazing Maurice and His Educated Rodents

A long time ago, a piper, dressed in multicolor clothing, helped a town called Hamelin to get rid of their rats, and the legend of Pied Piper of Hamelin was born. Discworld has a similar, but slightly twisted version of it, and this is how it goes...

A curious looking group made its way into a town called Bad Blintz. The group, made up of a talking cat, sentient mice, and an young lad, are here for a money making scheme. What is their plan? Upon entering the town, the mice will make nuisances of themselves until the townsfolk have had enough of them and wish their riddance, at their most desperate moment, the cat (Maurice) and the lad (Keith) will offer to rid the town of the rats, at a small cost. However, Bad Blintz already has problems of its own.

This story is called, The Amazing Maurice and His Educated Rodents, and it was Terry Pratcehtt's first Young Adult Discworld book.

The book itself is a parody of the aforementioned Pied Piper of Hamelin story, but it also reminded me of books such as Animal Farm and Flowers for Algernon. The book is cleverly written, it offers good humor and an exciting adventure. This novel is marketed as an Young Adult novel, but the story is one of the darker outings in Discworld. On the surface, we see a story about talking mice and cat and magic, but underneath the fantastic elements we see Terry Pratchett's realistic view of humanity, about generational clash, ethics, laws, and finding one's identity. For example, in my favorite quote from the book Terry Pratchett wrote, "If you don't turn your life into a story, you just become someone else's story". Do you agree with Sir Terry's assessment of life? I agree with him.

The Amazing Maurice and His Educated Rodents is a cute fairy tale, and it also offers good moral lessons. I knew Terry Pratchett wrote a couple of YA Discworld books but I couldn't imagine how he could pitch Discworld, an adult-oriented series, for young readers while also keeping his adult readers engaged. Now that I have read one of these YA Discworld books, I want more of it.

A Book Review: Being Mortal by Atul Gawande 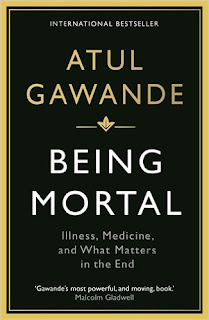 "The battle of being mortal is the battle to maintain the integrity of one's life"
- Atul Gawande, Being Mortal

Imagine the following scenario: You are told by the doctor, an incurable illness is spreading in your body and you will die in 3 months' time. You have two options. The first option is to undergo a treatment. This treatment, the doctor informed you, "may" prolong your earthly existence by three additional months, but it will come at the price of great sufferings, the loss of your dignity, and high medical expenses. On the other hand, should you choose the second option, then you will die shortly, but you get to go home, spend the little time that remains with your family and friends, and live the way you want, with dignity, until your time is up.

These are difficult choices; the first one offers survival, while the other one offers well being and dignity. Which option will you choose?

From birth, aging, sickness, to death, these are all parts of the human experience. In the past, people died quickly when they became very sick. Today, even when we become very old and terminally ill, modern medicine can still keep us breathing, but such a prolonged existence often costs us our well being and dignity. Furthermore, in the developed countries, the trend of the aging population is continuing its march. Therefore, what should be the philosophy of health care and aged care? At what point, should we stop the medical treatment and just let the nature take its course? Should the doctor strive for a patient's survival, or well being? In our society that values independence so highly, what happens when that is no longer possible?

No one likes to talk about sickness and dying, but unless the medical technology can make us immortal this is a conversation that all of us must have, at some point in our lives. Atul Gawande, a practicing surgeon from Boston, provided us with meaningful insights into this area, in his best-selling book, Being Mortal.

At 300 pages, Being Mortal is Atul Gawande's personal meditation, on how we can live well amongst the marching footsteps of aging and death. This book is also calling for a change in the way our society do and think about health care and aged care – that instead of focusing on survival and health, the focus should be " enabling well-being".

What does he mean by "enabling well-being"? Firstly, Atul explored the different models of aged care; that is, the traditional, multi-generational homes, as well as the new cultural norm of nursing homes. In this first part, which is thought-provoking, Atul detailed the evolution, the pros, and the cons, of our society's transition from multigenerational homes to nursing homes. Aged care is a difficult topic and it touches anyone who getting very old, or has parents who are becoming frail due to aging. In the second half of the book, Atul gave us many captivating stories, about sickness and dying, from his own experiences both as a surgeon, as well as being a son to a dying father. These stories are nuanced, they gave a dignified voice to those who are gradually losing their independence due to aging and sickness. From these stories, we get to see the world from the perspectives of those who are doing the dying, and not from the perspectives of medical professionals or concerned family members. Atul is a very good writer, he wrote evocatively and powerfully, and many passages in this book are stimulating as well as deeply moving.

In the end, Atul argues, "enabling well-being", means that we need to acknowledge, the human body will eventually decline, so instead of focusing on survival, we should adapt our society and health care to help people achieve what truly matters to them.

To quote Atul, who writes: "For many, such talks, however carefully framed, raises the specter of a society readying itself to sacrifice its sick and aged. But what if the sick and aged are already being sacrificed – victims of our refusal to accept the inexorability of our life cycle?"

Towards the end of the book, Atul briefly touched the topic of euthanasia, in which he made an argument against it. "Our ultimate goal", Atul argues, "is not a good death but a good life to the very end". What is your take on euthanasia? Must "a good life" and "a good death"be dichotomous to each other? Or, is a solution far more complex, not as clear cut, but lies somewhere in between? I don't know, and I leave my gentle readers to explore this topic.

My book club picked Being Mortal for our March reading and it is not a cheery book. Yet, this book nevertheless touched on topics that are relevant to all of us. At my book club meeting, some members who didn't finish this book were curious whether if Atul identified a solution to the problems associated with aging and bodily declines. The answer is no, Atul didn't have a quintessential solution to these problems, but he did drive home the message - we need to think about what matters to us the most, and then dedicate our actions and choices to that, accordingly. My book review, which is very brief, does not do justice to the scope and the depth of Atul's book, and this book is a great contribution to the growing body of literatures about aging. Being Mortal is a book that I would recommend to anyone who is mortal.

P.S. A word of caution, some readers may find this book too confronting, especially those who have family members facing the challenges described in the book.

Posted by Daniel Lin at 7:17 PM No comments: