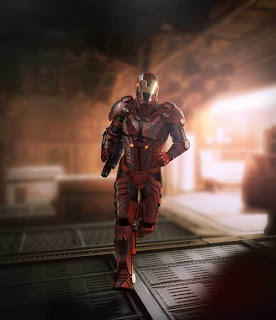 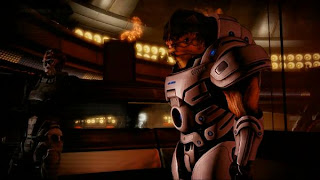 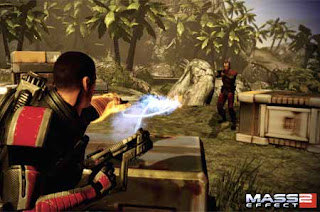 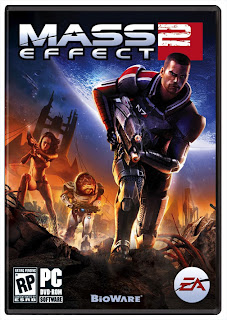 Following the release of their epic RPG adventure "Dragon Age Origins" in 2009, Bioware released the sequal to the critically acclaimed "Mass Effect". Mass Effect 2, was released in Feburary 2010 on Xbox360 and PC, so how does Mass Effect 2 live up to the expectation? Or is ME2 another bad sequal? Let's find out.

In Mass Effect 2 players get to be Commander Shepard again to save the galaxy from a threat that endangers the human civilization. While the story sounds simple, the introduction of the game is certainly mind blowing. 5 minutes into the opening cinematic Commander Shepard died in action, when I played ME2 for the first time I was wondering where the story was going when my Shepard died 5 minutes into the game. Without spoiling too much storyline, Shepard is then resurrected by a pro-human organizaion called Cerberus, and started to collaborate with the mysterious "illusive man" on a suicide mission to save the galaxy from a dangerous threat to all.

Having said this, if you have played Mass Effect 1 you will probably remember the game as a RPG, deep space adventure set in the future. Mass Effect 1 had a huge inventory system, and a traditional leveling up system for character progression as Shepard and his team mates gain experiences. In Mass Effect 2, the tiresome inventory system is gone, and instead of being able to change your armor and weapon half way throughout a mission by pressing the inventory key on your keyboard, now the players will have to visit the captain's cabin on Shepard's commanding ship prior to the start of the mission to choose the type of armor of weapon to use, which not only simplifies the inventory system, but also add a sense of realism. Bioware has claimed that the Mass Effect franchise will be a trilogy, and the choices and decisions you make in ME2 will be carried into Mass Effect 3 should you choose to import your commander Shepard in the future.

Mass Effect 2 is a very personal game, because if you have your saved game from Mass Effect 1, you can import your Shepard from Mass Effect 1 into Mass Effect 2 and start using that save file. All the choices you made from the first game will be carried into the storyline of the second game. This makes the game feel like "your story" and is a very nice feature.

Mass Effect 2 can be said as a real hybrid between an RPG and a 3rd person shooter. The combat system is very similar to "Gears of War" series, but only with more actions and biotic powers. The combat system is far more heavier than in ME1, which is a good change. It is also a very story driven game where every decision you make and very dialogue option you choose can have real consequences later in the game. The leveling up system of characters has been simplified a lot, instead of having a tedious and tiresome skill tree menu to add skills points to, now the player only have maximum 7 skills to level up, the skill builds are according to the character class. There are six character classes availiable in ME2: Soldier, Vanguard, Adept, Infiltrator, Sentinel, and Engineer, each character class has its own unique skill tress and the play experience is very different from class to class, adding tremendous amount of replay value.

For most of Mass Effect 2, the players will find themselves mostly doing quests for Shepard's comrades, from recruiting missions to special personal quest missions. This is a real nice change from ME1 because as Shepard, you really get to know your squad members really well, and by doing their special missions, you can gain their loyalty which is very important to as if they will survive the suicide mission or not, and minor spoiler here, if you are such a lame commander and no one is loyal to you, then your commander Shepard can actually die at the end of the game. That means no import game for Mass Effect 3.

Mass Effect 2 has a very strong storyline, there are so many cinematics in the movie at times you feel like you are watching a movie, only that you are in the movie making choices. AS a Christian, I did not really find any objective contents, there were some spiritual contents in the game when a squad member was talking to Shepard about "cause and effect". One of the character, who is a cyborg is called "Legion", the cyborgs claims this name because they are "many", which is a reference from the Bible. The violence level is pretty high, as the combat system is very heavy. YOu don't see blood very often because it's all "laser guns". There are minor sexual contents in the game, as commander Shepard you can choose to "romance" different squad members, or you can choose not to, which is fair enough. All in all, I did not find many offensive contents, but those who are sensitive to the idea of "alien life forms" should be warned, as the game world is filled with alien life forms and most of Shepard's squad members are aliens. My take is that this is just a game, it's entertainment and that is as far as it goes.

Mass Effect 2 uses Unreal engine 3.5, the graphics in this game is jaw dropping, the character animation is particularily well done, Bioware once again lives up to its reputation in this area. The artistic design of the game world is beautiful, at times I feel like the different cities and worlds are something out of the movie "Blade Runner".

The music in Mass Effect 2 is a vast improvement to ME1, the music is less ambient and spacey compared to ME1. The voice acting is amazing, Martin Sheen's voice acting as the "Illusive man" is probably the best voice acting in all video games I've seen yet.

So far I have completed the game three times, that is a total hour of 96 hours. I am starting a new game on the 4th go and I am stll not bored yet. It's just that everythng about this game is so top of the notch and is highly enjoyable. No wonder why all the critics review Mass Effect 2 as a better game to the famous "God of War 3" which was released on PS3 in may this year. In my opinion, Mass Effect 2 is one of those games that can be seen as on par to the legendary "Baldur's Gate" series, and I can't wait for Bioware to release its finale "Mass Effect 3".

Daniel's "game of the year" choice.
Posted by Daniel Lin at 1:47 AM No comments: