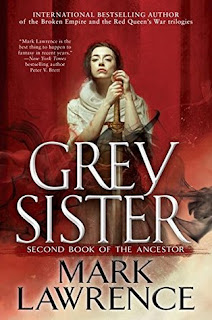 Mark Lawrence's story of assassin nuns continues in Grey Sister, a sequel to the acclaimed Red Sister. In this book, holy badassery clashes against a political conspiracy brewing in the empire of Abeth. It is a nail-biting story, of friendships and betrayal, and the book spelled sleepless nights for legions of fantasy readers young and old.

Nona Grey's education at Sweet Mercy is reaching a milestone; the young novice must choose which path she will follow – the path of prayer, or the path of sword and fist.

While Nona ponders on her career choice behind the covenant's walls an ambitious individual, a would-be empress, musters the strengths of the inquisition and the power of the noble to strike at Nona through a system which she calls home.

Now, Nona must find her own path, and it seems all roads before her are paved in blood and death.

Grey Sister is very well received by readers and it has a high score of 4.45 out 5 on Goodreads. However, my feelings about this book, like its predecessor, is also mixed. On the one hand I did not enjoy the first half of the book, but once the story reached the mid point I literally could not stop reading it. Therefore while I liked Grey Sister and I think it is better than the previous book, but I hesitate to heap praises at Grey Sister the same way I did with Mark Lawrence's other fantasy series.

What did I dislike in the first half of Grey Sister? To answer this question we must first dive into the mechanics of a fantasy book.

The fantasy genre prides itself at the creativity that goes into building and imagining an alternative world, where fantastic elements are fabrics of the reality. The worldbuilding in fantasy can take on the form of fantastic creatures, an interesting "magic" system, or a bit of both. It suffices to say, in a fantasy novel the worldbuilding often flows into the story and the characters, and therefore it is a key ingredient to a successful fantasy book.

At mid-book, however, Grey Sister became a different beast. The book suddenly changed its tempo in the second half, and the pace was fast and furious. There were many surprises and the stakes were high. It was nail-biting stuff and I could not stop reading it. When I turned to the last page I immediately wanted to read the next book because I was hooked and I wanted to know what is in store for Nona and her friends.

I think Grey Sister is a better book than Red Sister but it is still a notch below Red Queen's War trilogy. The first half of the book was slow and it was a detractor. However its action-packed second half made up for it. The result is a good but not great sequel that will have you asking for more. 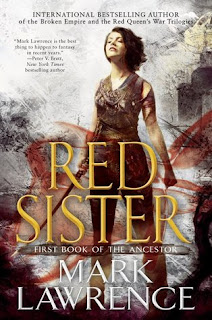 There are stories about warrior monks, but Mark Lawrence wrote a story about warrior nuns. If you like to see sword-wielding nuns kicking asses while playing court intrigues then Red Sister, the first book in a new fantasy trilogy, might be your thing.

At the empire's capital city an eight year old girl called Nona Grey was sentenced to hang. Her crime – murder. Abbess Glass of Sweet Mercy was in town and she rescued Nona from the noose, following the rescue Nona became a pupil at Sweet Mercy.

What is Sweet Mercy?

It is a covenant where young girls are raised to be killers. The education at the covenant, esteemed and subsidized by the church, is 10 years in length, where the sisters hone their pupils' skills to lethal effects. However talents became a rare commodity since the four tribes landed on the shore of Abeth, this is why the covenant is selective about who they train. After all, there aren't many diamonds in the rough. But this is also why the good Abbess rescued Nona, because she spotted true talent in the little girl.

However Nona has powerful enemies and they have very good reasons not to forget her. To survive, Nona must study hard and become a deadly assassin.

Mark Lawrence is a great writer and I am an admirer of his works. I am especially fond of his Red Queen's War trilogy, I love those books! However my feelings about Red Sister is mixed. Make no mistake, Red Sister is well received by readers and some are hailing it is his magnum opus. But I think this book is good but not great, and I have reasons for it. First let me talk about what I liked in this book.

The characters in Red Sister will steal the reader's heart. Indeed, characterization is the main strength in this book. Every character in this book, from Nona, her friends, and the covenant sisters, are likable and memorable. Nona is a flawed character, but her flaws make her qualities shine. Meanwhile, each of Nona's friend and teacher (the support characters) has her own background and personality, and they made an impression on my mind. Some readers are saying out of all the books they've ever read Nona Grey is their favorite character. While I wouldn't make the same proclamation but I can understand the sentiment, because Nona is indeed a very likable and well written character.

Red Sister may have scored high in the character department, but I believe the book had some pacing issues. On multiple occasions, to tell Nona's past, the book jumped back and forth on the timeline. These time jumps occurred in the middle of the chapters rather than in different chapters, the result is the story sometimes confused me, and it was also bogging down the pace. I am not saying this book is slow, because the action sequences are exhiliaring, but the sudden flashbacks in this book, coupled with the fast-paced actions, produced the strange effect where certain chapters felt painstakingly slow and the storytelling was choppy. This is my biggest qualm with Red Sister.

Another issue I have against this book, albeit minor, is the deus ex machina ending. Without giving away spoilers, let me just say I am not fond of those stories where at the critical moments the protagonists overcome impossible odds by suddenly discovering some power hidden in themselves. You know the type I am speaking of. I prefer stories where the characters' powers are portrayed realistically, even if it means they meet the end in defeat. I understand that Mark Lawrence was depicting how bad-ass and tough Nona is, but to me it also made the character and story progression unbelievable. Having said this, I do have high suspension for disbelief, so Nona's unbelievable power is a minor issue for me.

Despite the issues I discussed above, I do like Red Sister. In my opinion this is a very good book, and the idea of warrior nuns is cool. I want to find out what is in store for Nona and her friends, and I will be reading the sequel, Grey Sister.