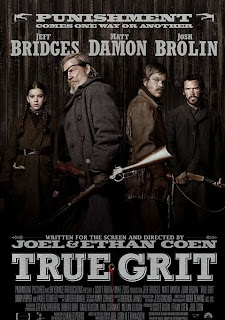 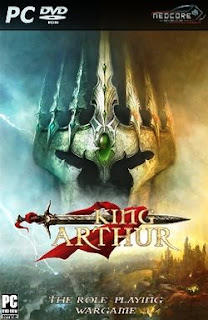 Do you like roleplaying games (RPG)? Do you like strategy games? Have you ever wanted to play a game that has both elements incorporated? No, I am not talking about Spellforce, this is called "King Arthur the roleplaying wargame".
"King Arthur Roleplaying wargame", as its title suggests is a blend of RPG and real time/turn based strategy game. Released on PC by a Hungarian company called Neocore in 2009. It features the player to play the role of King Arthur on his quest to build Camelot. This game has beautiful graphics, atmospheric soundtrack, interesting quest/plot system and is a very "hardcore" strategy title.
Set in 500AD, the story starts just after Arthur Pendragon pulled out the excalibur from the stone to became the king. The story is loosely based on the traditional Arthurian legend, where the players will engage in famous events such as Sir Gawain and the Greend Knight, Tristan and Iseult, Balin/Balan and the cursed sword etc..
Gameplay:
This is a title that blends strategy and roleplaying. For the campaign, the player will take on the role of King Arthur, and the game and its micro-management (money, food, movement of armies etc..) are controlled on a big map of Britain, in turn based style. When in battle, the gameplay switches to real time strategy. 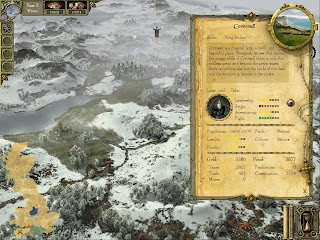 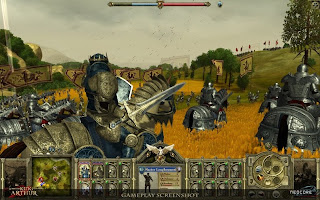 The ultimate goal is to take over every province in Britain. The campaign story is divided into four chapters, and quests appear sequentially as the game progresses. As King Arthur, every choice the player makes will affect the storyline and will determine the quests you will be getting later in the game. In addition, the roleplaying aspect of the game is based on a morality compass. The choice that the player makes during the game will slowly define King Arthur to two different types of rulers, i.e. either tyrant or rightful, and also his inclination to religion, i.e. Christianity or Old faith. Depending on the morality of your King Arthur, you can unlock different units and heroes.
The questing system plays out like 1980's adventure book, it is text based and you need to use the heroes (i.e. knights of the round table) to activate them. The quests makes the campaign very story driven, and can be very immersive and will drag you into the fantasy world of Arthuraian legend, packed with adventures and chivalry.
Furthermore, recruiting the knights of the round table is when the game really gets in touch with its claim to RPG. In this game, you cannot have an army going around without a hero leading it, you can recruit up to 11 knights/heroes at King Arthur's famous round table, and the heroes are divided into three classes each has unique skills and abilities. As they complete quests, and fight in battles they can level up, there are also weapons and armours you can get from doing quests, and you can equip your heroes with them. Some heroes will be loyal to you if their morality is similar to yours, and you can have ladies in your court to marry them to improve their loyalty. Another feature is you can assign your heroes to be the governors of different provinces.
The battle system is both the strength and the weakness in this game. The battle takes place in real time, and is highly detailed. Things like terrain and weather are the key factors on how you plan your battle strategy. There are three types of basic units: archer, cavalry, and infantry. You have to utilise all three effectively to win battles. However, the key to winning battles usually lies with the hero's skills. Combining these items the battles are really rewarding and satisfying. However, the battles are very hard, perhaps too hard sometimes that can be a bit overwhelming. Also, some of the army units are too powerful, especially the archers. Towards the end of the campaign there are just too many over challenging battles and that will have even the most die hard fan of strategy game holding their heads in frustration. The game can certainly use some better balancing.
Besides the campaign mode, this game also offers skirmish and multilayer mode.
Graphics:
The graphics in this game is great, the design is beautiful and really gives the player the feeling of the world from "The Once and Future King or Le'Morte d'Arthur . 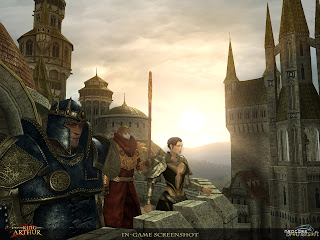 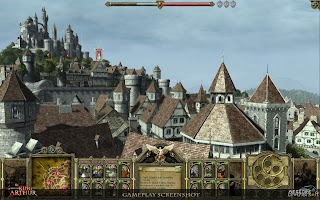 Sound:
The sound effect is pretty good, the soundtracks are of course, medieval style music to suit the game's environment and atmosphere.
Final verdict:
Story 8/10 - The main campaign is very story driven, while the story deviates from the traditional Arthurian legend, it is still very interesting because of the quest system in this game is very well done.
Gameplay 6.5/10 - Like I said earlier, the gameplay is great, but the battle system can use a bit of balancing. The battle involves the player to actually use strategies based on terrain and weather, like in a real war, and it can be really rewarding and satisfying, but the battles in this game can get very, very difficult half way into the campaign mode. Be prepared for many cries of frustration.
Graphics 8.5/10 - The graphics is pretty good, but the frame rate can be choppy sometimes when you zoom in, especially in massive battles. The design is very beautiful and captures the essence of King Arthur world.
Sound 7.5/10 - Good sound effects, appropriate soundtracks.
Replay value 8/10 - If you are not scared by the game's difficulty, you can replay the main campaign again after the first play through, make different decisions the second time to unlock different heroes and see how the story evolves differently. The skirmish mode adds replay value as well.
Sex/Nudity: none, I mean, pretty much every character in this game is wearing a bulky massive metal armour. There are no sex scenes nor suggestive scenes.
Violence: Well, this is a war game, meaning you fight battles and kill enemies by the hundreds. There are no blood splatter effects in the game. When a character die in the battle, he just lie down on the ground... a bit unrealistic but it does reduce the violence in video games a lot.
Conclusion:
I actually really liked King Arthur the roleplaying wargame, this is a solid blend of RPG and strategy genre, and many aspects of this game makes it really fun and will keep you coming back for more. However, the difficulty of the game is too high and it can become a very frustrating experience when you loose 10 battles in a row because of the unbalanced gameplay and some overpowered army units (hmm, especially the archers). The unbalanced gameplay is what is really hindering this title from becoming a really great game.
Final score: 7.5/10 (good)
Posted by Daniel Lin at 2:33 AM No comments:

Movie Review: Ring of the Nibelungs 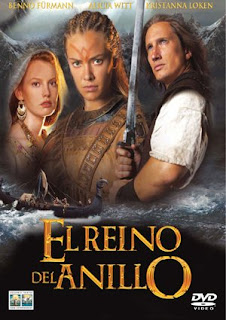 Do you like Lord of the Rings? If you are a fan, then you would be interested to know the source to Tolkein's inspirations to the forging of the world of Middle Earth. J.R.R. Tolkein was a fan of Norse mythology, and he drew inspirations from various materials such as Beowulf, and some of the epic sagas from the old Norse world. Such as the Völsungasaga and Nibelungenlied (the two are actually parallel to each other, while the Nibelungenlied is pretty much the German version of the Saga of Volsungs).

Nibelungenlied, is the story of Siegfried the dragon slayer and Brünhild (the Queen of Iceland). It is epic, beautiful and tragic. A story about love, greed, friendship and betrayal. The movie, Ring of the Nibelungs is a TV mini-series based fantasy film made in 2004. The story is based on the Saga of the Volsungs and German epic poem Nibelungenlied. It is a 2 parts film that contains parts of the stories from the Völsungasaga. I watched it on home video just a few days ago, and I think it is one of the most faithful film adaptations ever made.
The story of Ring of the Nibelungs is about the rise and the fall of Seigfried, a hero whose fame was built after he slew a dragon. The DVD version of the film is 177 minutes, and has two parts. Part 1 focuses on Seigfried's rise to power. Part 2 is portrays how greed, jealousy and betrayal brought doom upon the main characters in the story. I do not want to spoil the story here, so all I am going to say is that the story is one of the most intriguing tales in Norse mythology. 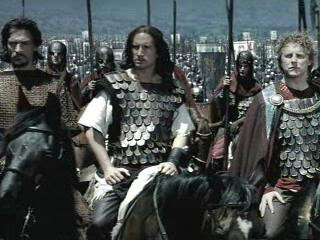 itself is well made, one must remember that this is a low budget, direct to TV film, so it does not have the Hollywood standard production values. However, the cinematography is very well done. The acting is medicore, while the lead characters did a good job, the supporting actors/actress are less expressive. Part 1 of the movie is a bit cheesy, but part 2 is when the movie really gets interesting, where the characters and the story really start to develop.

The central theme of the story is about the consequences of greed, but I have to put up warnings here, unlike Hollywood productions where most stories have happy endings, the ending to Ring of the Nibelungs is tragic, but this is a faithful adaptation to the original poem, and I thought the director did a good job at keeping the story original and resisted the temptation of altering the story to make an "Americanized, general film". Ring of the Nibelungs is like Lord of the Rings, the differences are that it is much darker and is set in the ancient Norse world.
Overall, I really liked Ring of the Nibelungs, not only because I am a fan of the Völsungasaga myself, but more so because this movie is a great adaptation. If you like Tolkein's Middle Earth mythology, and like the movie Lord of the Rings then I think you will like Ring of the Nibelungs. 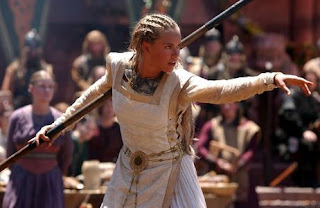 Ratings:
Story 10/10 - faithful to the original Völsungasaga and Nibelungenlied, the story is epic, beautiful, dark and tragic.

Video 3.5/5 - this is a low budget direct to TV mini series, the production value is not on par with the Hollywood ones, but the visuals and cinematography are great.

Sound 3/5 - The music is good, but the sound effect for the fighting scenes are over done.

Acting 3/5 - the lead actor/actress did a good job, but the supporting actor/actress are somewhat mechanical in their portrayals, expressions and emotions.

Violence - The level of violence in this film is not very high compared to most of the Hollywood movies. Most of the death scenes only contain blood, and no decapitation or amputation of limbs on human. There is a scene showing the head of a dead dragon, but I think most audience over the age of 13 should be fine with the violence level in this movie.

Sex/nudity: There is one sex scene earlier in the movie and contains partial nudity, there are no frontal nudity scenes.