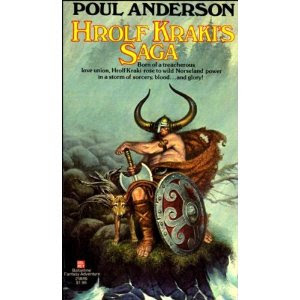 The Saga of Hrolf Kraki is one of the Norse Epic Saga, originally composed in approximately 1300 AD, the saga of Hrolf Kraki has many cross references to "Beowulf". The story is about a Danish King, Hrolf Kraki and his path to become the king of Denmark. In this book, "Hrolf Kraki's saga", novelist Poul Anderson has crafted a re-telling of the epic saga in prose translation. Published in 1973, the novel was nominated for the British Fantasy Award in 1973, and was general well received by the public. With stories involving giants, elves, magical swords wielding Norse warriors and background in Norse mythology and much more, this is exactly my cup of tea. The book is currently out of print, and with no small efforts I finally tracked it down on ebay and received it recently.

I am reading it now and a review will follow soon.
Posted by Daniel Lin at 8:39 AM No comments:

Book Review: Soon I will be Invincible 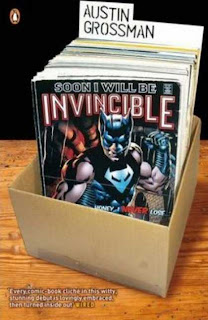 Two years ago while I was browsing through the bookshop, I came across "Soon I will be Invincible", a novel written by author Austin Grossman. I had never heard of Austin Grossman at the time, but the superhero comic style cover was capturing. I read the summary at the back of the book, and the description says: "This morning on planet Earth there are 1,686 enhanced, gifted, or otherwise-superpowered persons. 678 use their powers to fight crimes, while 441 use their powers to commit them, 44 are currently confined in Special Containment Facilities for enhanced criminals. Of these last, it is interesting to note that an unusually high proportion have IQs of 300 or more - 18 to be exact, including me...".

The book seemed interesting so I decided to give it a try to find out what this is all about.

The way the story is told in this book is in first person narrative. Although this is a book about superheroes and super villains, but the entire story is about the super villain Dr. Impossible, a mad genius with Malign Hypercognition Disorder who has attempted to take over the world 12 times, but all his attempts failed due to the effort of a team of superheroes, the Champions. Without spoiling too much story, the plot started with the team of superheroes pursuing a mission to search for one of the greatest superhero "CoreFire", who had been missing for a few month. All the while, Dr. Impossible escaped from the prison and started to plan for his 13th attempt to take over the world. As the story unfolds, the readers find out more and more about Dr. Impossible, such as his motivations and a more in-depth view of the live of a super villain. In the book, it is interesting how Dr. Impossible reflected about his own life and wondered what would have happened if he had used his high IQs for the benefit of mankind, but it is his own impulsive behaviour of trying to take over the world (possibly due to his mental illness) that prevents him from ever living a happy existence. This brings up a very interesting theme of actions induced by mental illnesses V.S. personal choice and personal responsibility. I got the feeling that the author was trying to convey that Dr. Impossible's actions are due to his mental illness, and therefore his is not solely responsible for his actions because it is not "him" who made the choices of being an evil genius. This is a very post-modern concept, and is something worth pondering about. Personally, I think mental illness or not, every one is still responsible for their own choices and actions.

Another unique component of this book is, because the story is told in first person narrative through the eyes of Dr. Impossible, the author let the readers decide the nature of Dr. Impossible.

Overall, this is not a bad book, the story is original but some parts of the plot doesn't really connect very well.