A Book Review: The Complete Lyonesse by Jack Vance (Lyonesse #1-3) 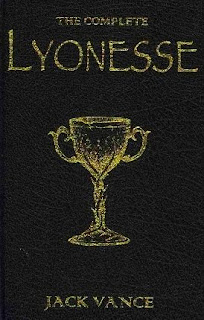 Jack Vance is a very famous author of fantasy fictions. Despite his high reputation, Jack Vance's award-winning fantasy epic, Lyonesse trilogy, remains a classic that many fantasy buffs have heard of, but have never read. Published in 1983, Lyonesse trilogy is deeply rooted in Celtic and Arthurian legend, and the trilogy narrates a stunning, beautiful story. It is a mystery why Lyonesse trilogy is under-appreciated.

I came to know Lyonesse trilogy's existence, from George R.R. Martin's “recommended book” list on Goodreads. I purchased an omnibus edition, published by Gollancz and titled “The Complete Lyonesse”. This is a solid, hefty tome counting to 1000 pages, and sparsely illustrated by award-winning illustrator Les Edward. This book contains all 3 novels in Lyonese trilogy; Suldruan's Garden, The Green Pearl, and Madouc. After I read this book, my opinion is that Lyonesse trilogy is a must read for all lovers of fantasy literatures. Therefore today, I would like to provide a review for this book, giving would-be readers a brief overview of what they can expect from Lyonesse trilogy, and why I highly recommend this book.

Before the coming of Arthur Pendragon and the age of Camelot, there was a forgotten era when fairy magic and chivalry walked side by side in The Elder Isles, an ancient land southwest of Cornwall. The Elder Isles was a land fated to doom. Yet, memories of knightly quests, beautiful damsels, arcane sorcery, and kings at war decorated the story of this mysterious land.

On The Elder Isles laid a kingdom called Lyonesse, reigned by the brooding, ambitious King Casmir, whose queen gave birth to Princess Suldrun. Who, due to her gender, was not favored by 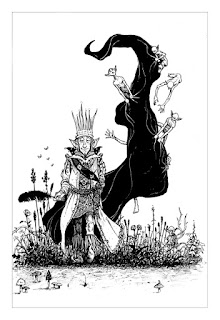 her parents. As Suldrun came to age, Casmir seek to reap political leverage by marrying her to his allies. Suldrun refused the marriage arrangement, thus angering the king, who punished Suldrun by exiling her to a secluded garden.

On a moonlit night, the midnight tide washed ashore to Suldrun's Garden an uncounsious, but handsome stranger. He was prince Alias from Troicinet and Suldrun saved him. Young love soon kindled between Alias and Suldrun. However, their love was destined to tragedy, opening the first chapter to a wondrous tale. A tale where a baby prince would exchange his fate with a baby fairy, an exchange that will forever re-shape the history of The Elder Isles.

My thoughts about this book:

The Complete Lyonesse collects all 3 novels in the trilogy; Suldrun's Garden, The Green Pearl, and Madouc. This trilogy is grounded in Celtic and Arthurian legend, where the story referenced to icons in Arthurian cycles, such as the Round Table an the Holy Grail. Furthermore, the narratives in Lyonesse trilogy resemble these classical legends in tones, the mood, and settings. In other words, Lyonesse trilogy is a modern classic crafted in the true fashion of Celtic and Arthurian legends.

I think Lyonesse trilogy is an unique creation in the fantasy genre. These books impressed me as a series of dark fairy tales inter-connected by a main story arc. Please note I described this trilogy as “dark fairy tales”, meaning this trilogy is not suitable for children. Having said this, the tones and the atmosphere of this trilogy is unlike the modern “grim-dark” fantasy genre. What I mean is, Lyonesse trilogy is “dark”, in the same way that Le Morte d'Arthur is dark. Where both cycles told stories cast with realistic, sometimes flawed characters, whose fate could be tragic and disturbing in the story's telling. 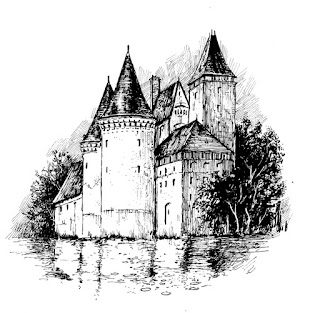 Jack Vance wrote beautifully and elegantly. He commands excellent English. Vance's writings are intricate but not verbose, his style differs from most best-selling authors of our time. This also means Lyonesse trilogy is not a page-turner. Skimming will only pave the way to confusion. However, it is worthwhile investing time and energy to decipher Vance's writings, because a reader would surely come to appreciate Vance's beautiful use of words. But I would also like to comment, I think the storytelling in Lyonesse trilogy sometimes suffers from uneven pace.

For the most parts, the stories in these novels are engrossing. The stories flowed smoothly, but every now and then, some little parts would slow down the story, choking up the flow. The uneven pace does not ruin this trilogy, because the strengths of this trilogy outweigh this one weakness by a large margin. I also want to mention, the uneven pacing problem is more common in Suldrun's Garden, but gradually improved in the later books of the trilogy.

Lyonesse trilogy features a cast of intriguing characters. The main protagonist in the first two novels, is Prince (who became King) Alias. I particularly like his role in the first novel, Suldrun's Garden, where the the second half of the novel narrated his tale of becoming the king of Troicinet. Yet, the most intriguing character from Suldrun's Garden, is none other than Princess Suldrun herself. She is a well developed character, and her tragic romance with Alias haunts me with bitter sweet memories that lingered in my mind long after I finished Suldrun's Garden.

The main antagonist in Lyonesse trilogy is King Casmir. He is a brooding, ambitious man who emanates a powerful presence. He attempted to seize the governance of The Elder Isles under his reign. He is ruthless, and showed little fatherly love for his daughter Suldurn, treating her as a bargaining chip to gain him political leverage. I opine King Casmir is mostly a vividly portrayed, believable character, but the story didn't really explain his motives so his character is not as mufti-dimensional as he could be. 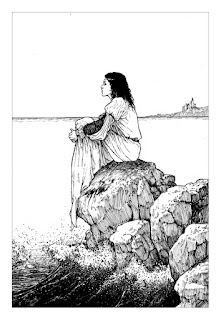 In contrast, the motives of Prince/King Alias, the main protagonist, is well expounded. He hates King Casmir for his cruelty against Suldrun, a cruelty that cursed their love to an inevitable doom. However, as the main protagonist Alias seems too perfect. He (almost) never made any mistake. This means, while Alias is also a vividly portrayed, believable character, but his perfection deducted some intrigues from his character.

The pace and the tone of the story changed in The Green Pearl. This novel mostly focused on Alias' struggles to establish himself as a legitimate ruler of his kingdom after the events in Suldrun's Garden. Once again, I like the story about Alias' struggles as a young king, but he is still too perfect and his character appears two-dimensional. The story in The Green Pearl bridged Suldrun's Garden, and the final book in the trilogy, Madouc. The Green Pearl retains the charms and the magic from Suldrun's Garden, and it is a lovely novel despite some minor problems with characterizations, and the occasional uneven pacing of the story.

My favorite novel in this trilogy, is Madouc, which concludes the story of Lyonesse. This novel has a lighter, more humorous tone than the previous two novels. The main protagonist in Madouc, is Princess Madouc. She is a half fairy, and her mother exchanged her for Alias' son, Prince Dhurne, when they were both little babes. As a result of this, King Casmir thought Madouc was Suldrun's child, and she grew up in the royal court as a princess. King Casmir treated her in the same way as he treated Suldrun, a bargaining chip to be married off in exchange for political leverage. However, Madouc's fairy nature rendered her an unruly, independent child. Whose will often led her to contrast the strict conducts at the royal court, making her a subject of controversy among the society of nobles.

Madouc focused on Princess Madouc's journey to find her true parentage. Let me say I absolutely loved the portrayal of Princess Madouc and her character. Her adventures (and misadventures) are funny and engrossing. Her character is touched by innocence, good wits, humor, and alive with determination. All the while, Madouc's conducts are tinged with little mischief here and there. It is a combination of these qualities that made Princess Madouc my favorite character in Lyonesse trilogy, and I would unhesitatingly add Madouc in my top 5 female characters in fantasy fictions.

My brief review does not do Lyonesse trilogy justice, but I hope it had provided would-be readers with some ideas about what to expect from it. The story of Lyonesse is both beautiful and magical, and the characters are likeable and vividly portrayed. While these books may occasionally suffer from uneven pacing, but the strengths out-weigh the weaknesses by far. This is a classic tale every lover of fantasy fictions should read and treasure, especially if you like Celtic and Arthurian legends. 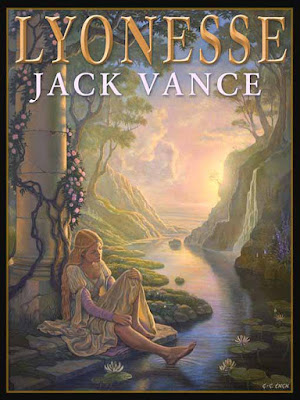